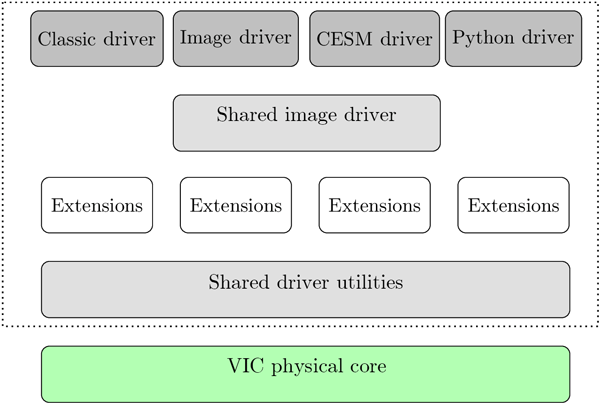 We presented the VIC-5 release and discussed its scaling performance in blog posts in 2016, but we finally published the manuscript that describes VIC-5 in detail. The paper was the culmination of nearly five years of model development work by the group to upgrade the model and was published in August 2018 in Geoscientific Model Development. Joe Hamman, a former member of the Computational Hydrology group and now a Project Scientist at the National Center for Atmospheric Research (NCAR) in the Climate and Global Dynamics (CGD) group, was the lead author. The new version of the model, VIC-5, was first released via GitHub in 2016 and subsequent releases occurred in 2018 as well.

The VIC model was originally developed at the University of Washington in the early 1990s by then-Ph.D. student Xu Liang for her dissertation work and quickly became one of the most commonly used hydrologic models for large domain hydrologic simulations. The first VIC paper was published in 1994 with Liang as the first author, and by 2017 the original Liang et al 1994 paper had reached over 2000 citations. Development of the Regional Arctic System Model (RASM), a fully-coupled regional earth system model that uses the VIC model as its land surface model, spurred a significant overhaul of the VIC modeling infrastructure to facilitate easier and more streamlined coupling with a fully-coupled climate model. Furthermore, members of the group wanted to facilitate easier collaboration between model users, since the user group had grown to include members across Asia, Africa, Europe as well as North and South America, thus development of the model migrated to GitHub.

From 2013 on, members of the group conducted a significant overhaul of the VIC model infrastructure. This overhaul consisted of five key components: 1) separation of model physics from input and output, 2) creating multiple model types (called “drivers”) to support different modeling applications, 3) parallel processing to enable fast large-domain simulations, 4) improvement of model documentation, and 5) a comprehensive test suite as a framework for collaborative model development. The most noticeable part of the model reconfiguration is the model “drivers”, which include the classic, image, python and the CESM drivers. The classic driver is the legacy VIC configuration supporting the traditional time-before-space mode, whereas the image driver is the space-before-time configuration, which supports Network Common Data Format (NetCDF) inputs and outputs. The CESM driver facilitates the coupling of VIC to the Community Earth System Model (CESM) infrastructure, which is currently implemented within the Regional Arctic System Model (RASM). The python driver includes Python bindings to all functions and data structures contained in the core of the VIC model.

Together, these improvements represent a major step forward for both the VIC model as well as the broader hydrologic modeling community. The model has now been “brought up to technological parity with other widely used hydrologic models”, said Ted Bohn, a Research Scientist at the University of Arizona who has been actively involved with VIC development and was also an author on the paper. Moreover, the entire VIC user community can now take advantage of thoroughly tested code, parallel computing, NetCDF input/output (IO), easier coupling to atmospheric models, and model development and collaboration hosted via GitHub. This is a seminal paper for hydrologic modeling and we expect that this model development framework will be used as a template for other hydrologic models going forward.

Funding and acknowledgements: This research was supported in part by United States Department of Energy (DOE) grants DE-FG02-07ER64460 and DE-SC0006856 to the University of Washington and grant 1216037 from the National Science Foundation’s Science, Engineering, and Education for Sustainability (SEES) program. Supercomputing resources were provided through the United States Department of Defense (DoD) High Performance Computing Modernization Program (HPCMP) at the Army Engineer Research and Development Center (ERDC) and the Air Force Research Laboratory (AFRL). We thank Anthony Craig for his feedback during the design and implementation of the image and CESM drivers. We also thank Wietse Franssen and Iwan Supit for their contributions to the streamflow routing extension.